Wanna Get Away? 7 Best Southwest Flight Deals to Book With Points

Looking for a Southwest deal? Use your Southwest Rapid Rewards points to book any of these flights.

Time and time again, I’ve realized that Southwest Airlines has some of the best travel rewards I’ve ever seen.

Southwest Rapid Rewards points are relatively unique, because the cost of an award ticket is tied to the cash price. This means that when the airline runs a fare sale — and that happens often — you can score a roundtrip flight for as little as 4,210 points. When Southwest credit cards are offering big sign-up bonuses, it’s a great time to consider all of the possibilities.

>>NEXT: Biggest Travel Credit Card Deals and Bonuses: Up to $1,250 in Free Travel and More

The Orlando area is one of my family’s go-to destinations for fun and sun. The area is loaded with entertainment options, including Walt Disney World, Universal Studios, SeaWorld, Legoland and much more. There are always deals on accommodations because of the sheer volume of hotels, vacation homes and condos available to book. Plus, several gorgeous East Coast beaches, like Cocoa Beach and Daytona Beach, are a short drive away from Orlando if you need some TLC at the ocean.

There’s no shortage of Southwest flight deals to Orlando either. It’s almost always how our family saves money on airfare when visiting Mickey and the gang. From New York City (LaGuardia), I found a roundtrip flight for just 14,251 Southwest Rapid Rewards points. As one of Southwest’s most popular destination cities, you’ll likely find plenty of deals on flights to Orlando no matter where you live.

For white sandy beaches and sparkling blue oceans, get away to Cancun, Mexico. Located on the edge of Mexico’s Yucatan Peninsula, its beaches stretch for miles. Stay at one of the many luxury or family resorts, including some of the best all-inclusive resorts in the Caribbean. The area is also known for its nightlife and incredible culinary scene. Spend your time lounging poolside at the resort or plan excursions to some of the area’s top attractions, including a visit to the Mayan Ruins, boat, diving and wildlife tours and much more.

Depending on the time of year and your departure city, you can find great deals on flights to Cancun. For example, I found roundtrip airfare from Houston to Cancun for 16,932 Southwest points plus $91.60 in taxes and fees (they’re usually just $5.60 each way). 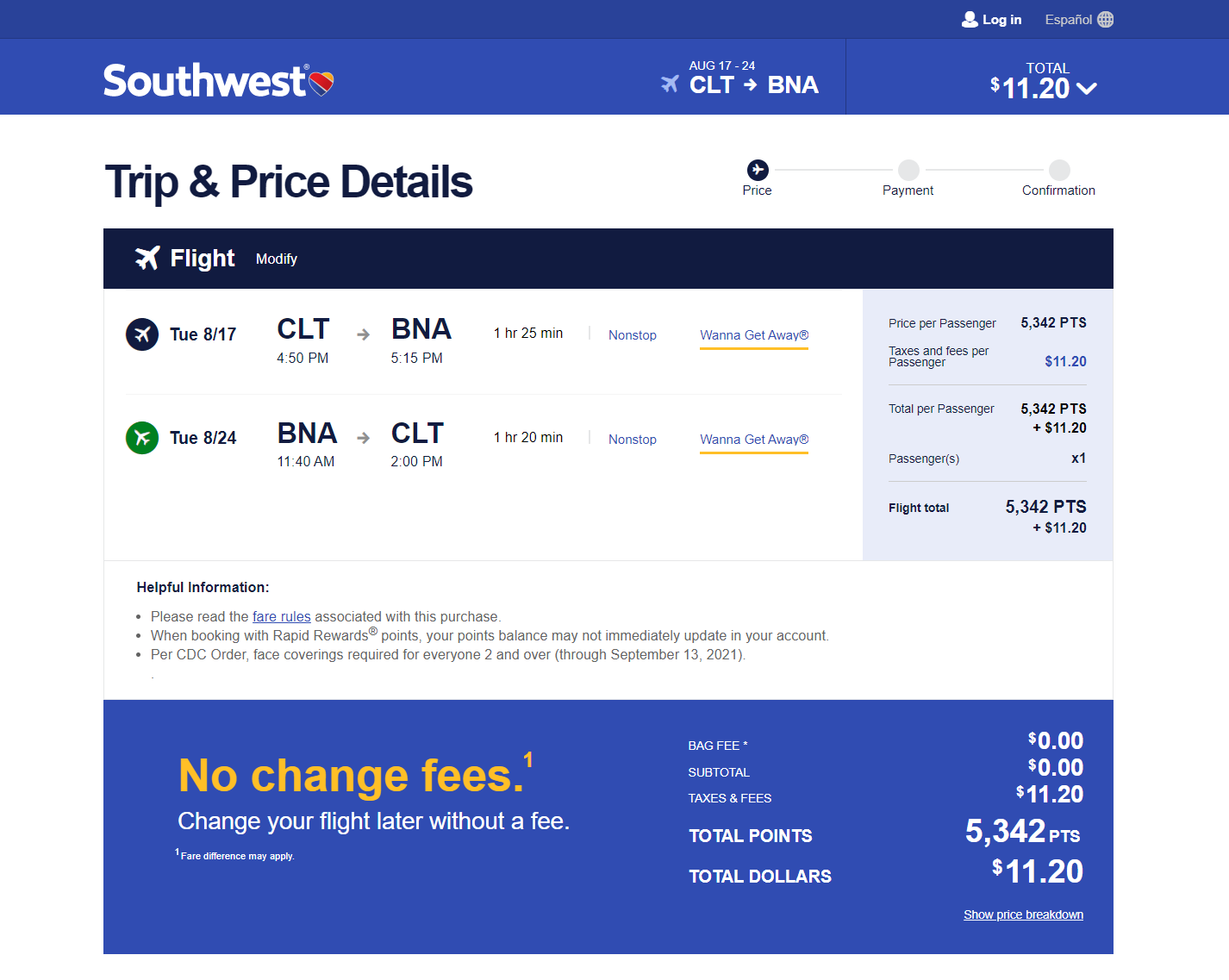 Another popular summer destination to consider this year is Nashville, Tennessee. Known to locals and visitors as Music City U.S.A., Nashville has one of the liveliest music scenes in the country. Spend your night listening to live music at the legendary Bluebird Cafe or one of the city’s other music venues. It’s also known for its eclectic food scene, including its world-famous hot chicken and some of the best barbecue around.

Nashville isn’t just music and chicken. The town boasts several museums, sporting events and outdoor excursions to entertain individuals and families alike. Our family has flown through Nashville International Airport several times as a layover stop, but you can find plenty of deals if you want to stick around Music City for a while. I found a roundtrip flight from Charlotte to Nashville in August for 5,342 Southwest points. 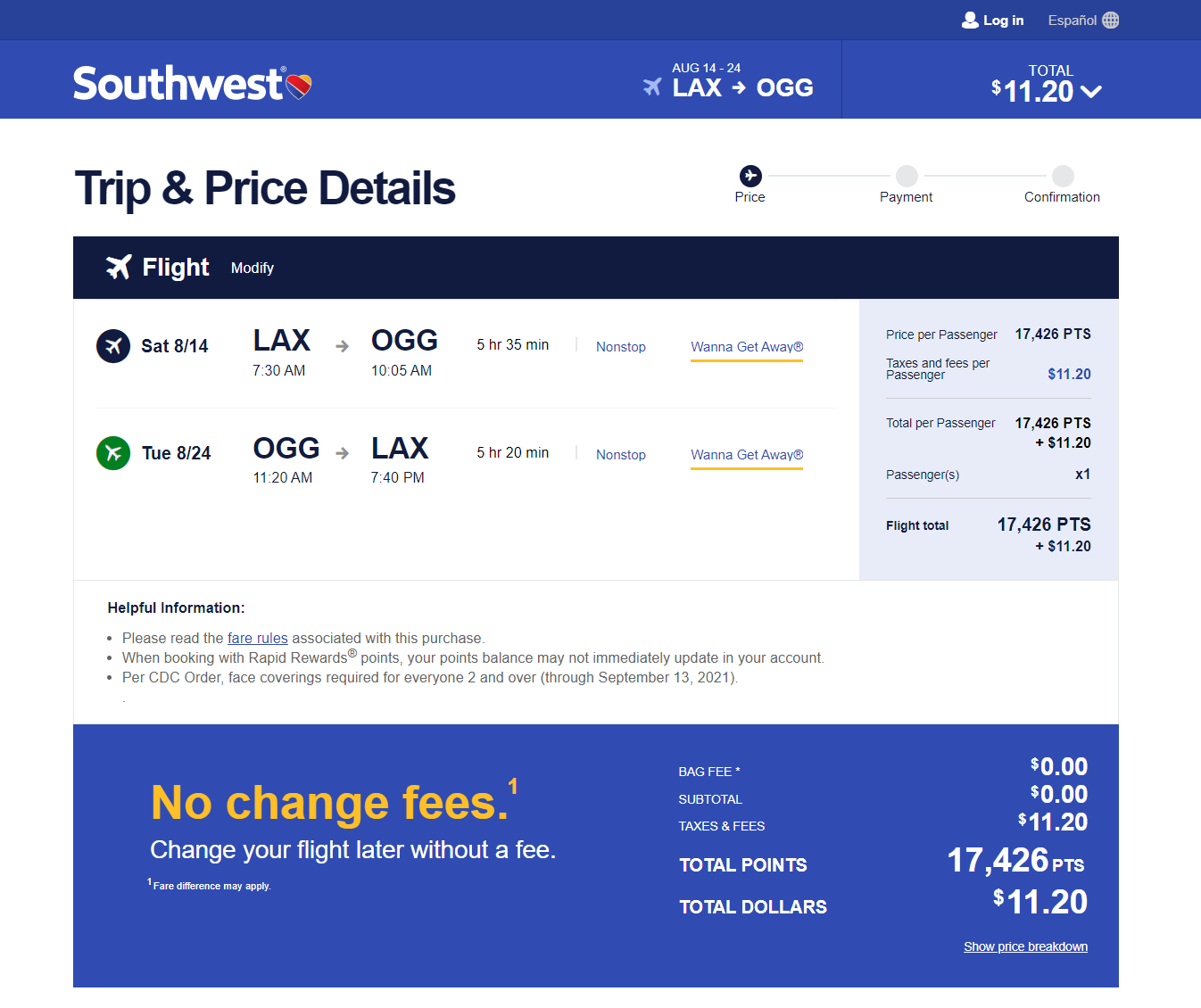 For world-famous beaches, make sure Maui is on your radar this summer. The second-largest Hawaiian Island, Maui boasts world-class beaches great for sunbathing and surfing. Don’t forget about its other attractions like hiking trails, water sports and parasailing. Maui also sports some of the best beachfront resorts in the world. Whether you’re a nature lover, a history buff or just need a relaxing getaway, Maui is one of the most popular travel destinations.

You can find Southwest flights to several of the Hawaiian islands, including interisland flights. If you prefer not to island hop, you can just book airfare to Maui directly. I found several affordable flights from West Coast cities, including roundtrip airfare from Los Angeles to Maui for 17,426 Southwest Rapid Rewards points.

Our family’s first post-pandemic vacation was to the Destin area. We’d never been there before and were absolutely blown away by the beauty of Destin’s white sand beaches. Few U.S. beaches boast clearer water than you’ll find in Destin and surrounding areas like Fort Walton and Miramar Beach. Located along Florida’s Panhandle, Destin is one of the popular family vacation spots. Besides the beach, tourists can enjoy the Florida sun by exploring hiking trails at Henderson Beach State Park and other local nature adventures. Watersports and water parks are also great options when visiting Destin. We opted to rent a condo during our stay, but there are plenty of quality hotels and resorts to choose from in Destin.

You can find flight deals to Destin year-round, although cheaper flights are usually reserved for off-peak season. There are a few airports within an hour’s drive from Destin, but Southwest doesn’t fly into all of them. I was able to find a roundtrip flight from Denver to Destin-Fort Walton Beach Airport in August for 17,648 Southwest points.

One of the most popular East Coast beaches, Myrtle Beach offers something for nearly every traveler. Our family has vacationed in Myrtle Beach several times. The area is lush with beautiful beaches, oceanfront resorts and hotels and entertainment galore. Options include swimming and surfing, fishing excursions, parasailing, shopping, shows, amusement and water parks, sports, restaurants and much more. Myrtle Beach might be a bit more commercialized than some beachgoers care for, but there are plenty of places to stay on the outskirts of town and its surrounding communities to find peace and tranquility on the beach.

We live close enough to drive to Myrtle Beach, but for people who don’t or prefer to fly, there are deals to be had through Southwest. For example, I found roundtrip airfare from Chicago (Midway) to Myrtle Beach for just 13,094 Southwest points. You may find even better deals further into the summer. 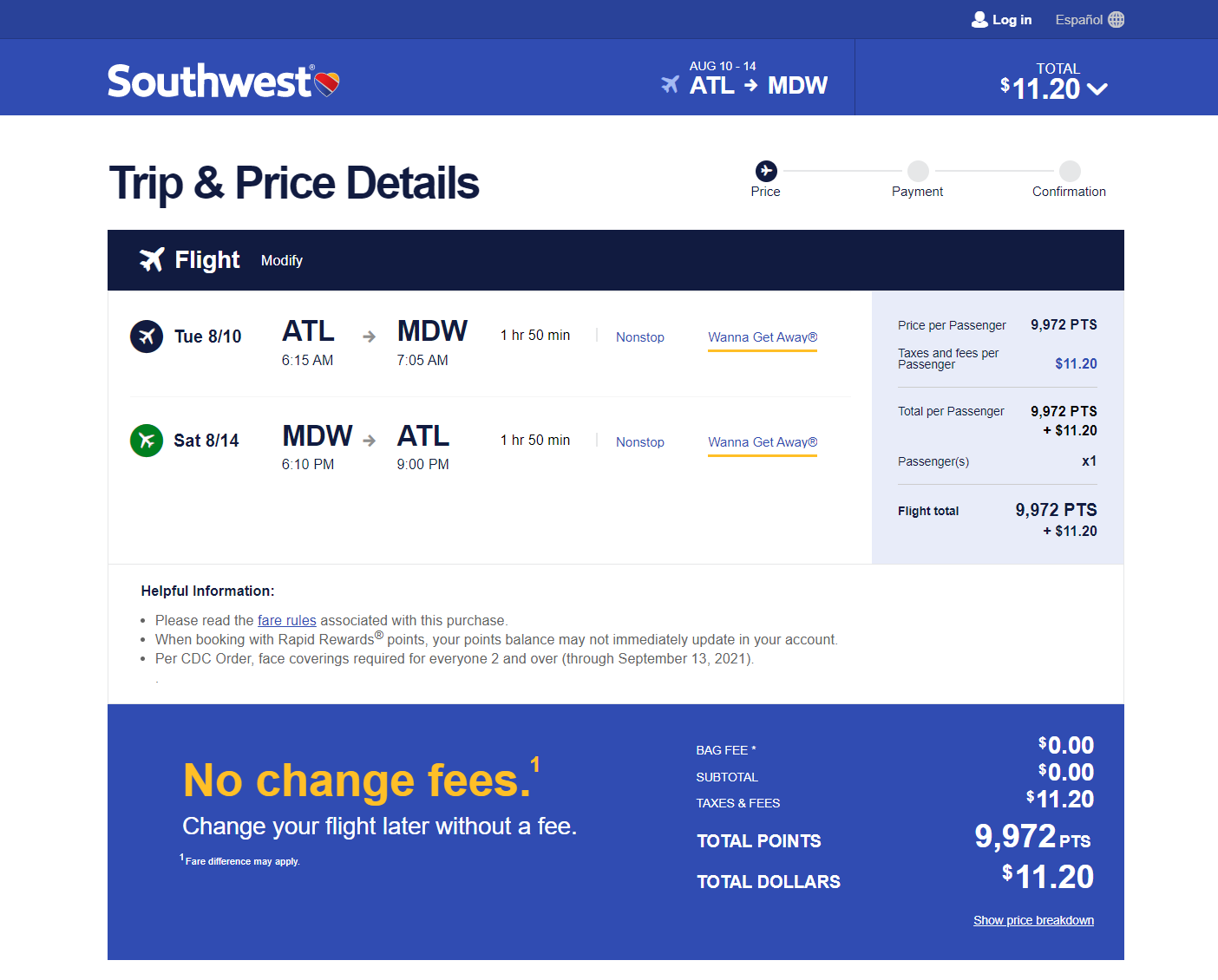 Speaking of Chicago, the Windy City is another top spot to visit this summer. As one of the largest cities in the U.S., Chicago truly is a traveler’s dream. I’ve visited the city several times and always discover something new each time. Even if you’re not a sports fan, there’s nothing like catching a Cubs game at Wrigley Field. The city is packed with cultural experiences like the Field Museum, SHEDD Aquarium, the Museum of Science and Industry and the Art Institute of Chicago. No trip to the Windy City is complete without walking along Navy Pier for a bit to eat or a ride on the famous Centennial Wheel. For shopping, Chicago’s Magnificent Mile has almost every store you can imagine.

Chicago is home to two main airports — Midway International Airport and O’Hare International Airport. We live close enough to drive, but there are plenty of airfare deals through Southwest with so many flights into the city. I found roundtrip airfare from Atlanta to Chicago Midway for just 9,972 Southwest points.

How to Use Southwest Points

Southwest deals can vary based on where you live, but you can find great award flights just about anywhere. The only downside is that Southwest’s international flight options are somewhat limited. That said, here are a couple of ways to squeeze as much value out of your Rapid Rewards points as possible:

How to Earn Southwest Points

You earn Southwest points whenever you book a flight with Southwest Airlines. You need to become a Southwest Rapid Rewards member before earning points, but it’s free to join.

Additionally, you can buy Southwest Rapid Rewards points through the airlines website. 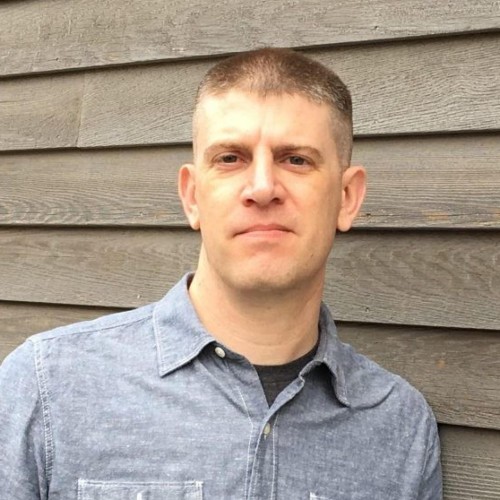 A Complete Guide to the Southwest Companion Pass

4 of the Best Alternatives to the Chase Sapphire Preferred Card